The store will not work correctly in the case when cookies are disabled.
Free Shipping Now Included*Exclusions Apply
US Distributor of Push® Braces
Skip to Content

Active Redirection Instead of Passive Motion for Joint Stiffness

We use the word stiff (which means difficult to bend; rigid) to describe hand joints that lack motion and provide resistance to movement. The soft tissue structures in the hand do not harden like concrete to become inherently “stiff,” but rather undergo a change in their physical properties preventing them from moving relative to one another.

Following trauma to the PIP joint or lack of PIP joint movement, the absence of essential stress  creates a lack of differential glide of these structures which is perceived as stiffness. The application of controlled stress (motion) across stiff joints both aligns new collagen fibers to decrease resistance and maintains lubrication within the collagen cell matrix to prevent abnormal cross-linking.

Therapists often apply a mobilization orthosis to a stiff joint intermittently with the intention of applying “lowload prolonged stress” to alter tissue2-4 , but the intermittent application defies the definition of “prolonged.” What is needed is deformation of the soft tissue by frequent repeated stress application instead of the short-lived visco-elastic response (stretched collagen returns to original length and shape). It is the viscoelastic behavior of human tissue that dooms passive stretching to limited use in managing joint stiffness5 because change results only from prolonged, repeated appropriate stress application.

During joint immobilization and/or limited joint motion, the brain changes the motor representation in response to the altered movement. Multiple studies have shown that motor areas that are used enlarge, and those unused lose cortical representation.6-9 An example is a patient who has sustained a distal radius fracture.

During wrist immobilization, finger flexion may be initiated with metacarpophalangeal (MP) joint flexion rather than interphalangeal joint flexion. When the wrist immobilization is removed, the motor cortex has re-defined the beginning of finger flexion as starting with MP joint flexion (Figure 2). To alter this brain change resulting from muscle imbalance, the muscles unemployed while the wrist was immobilized must be activated repeatedly over time to reestablish their proportional cortical representation. This cannot be accomplished with passive motion.

Therapists often describe joint motion as having a soft-end feel or a hard-end feel. Joints with a soft-end feel describe collagen with minimal cross-linking and the presence of edema (the softness at end range). A joint with a hard-end feel identifies tissue with significant collagen crosslinking, preventing differential tissue glide and providing a defined end point to passive motion.

A soft-end feel joint is responsive to gentle stress at this stage of early collagen cross-linking. Intermittent stress is usually effective if followed by active motion. Passive range of motion (PROM) is appropriate, but must be defined as a gentle, slow, sustained stretch that never results in pain or increased inflammatory response. Balanced active motion can easily be restored because re-patterning of the motor cortex has not yet occurred; only encouragement is needed to change the tissue.

When a joint has a hard-end feel, the intuitive response is to push the stiff joint to apply enough stress to recreate joint movement; traditional treatment assumes PROM is necessary to regain active range of motion. Ironically, the stiffer the joint, the less passive range of motion is effective because it is short-lived and intermittent. Several studies suggest that short-term passive range of motion may initially have a positive effect, but proof of a long-term positive effect is absent and there is suggestion of a negative response to intermittent PROM in the presence of joint stiffness.10-12 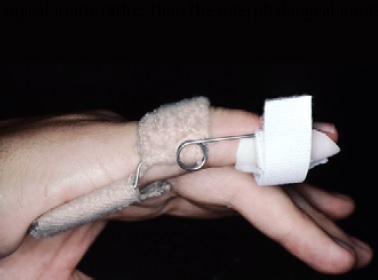 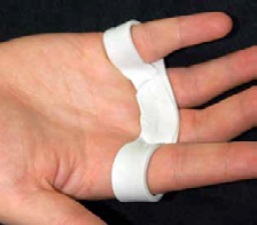 Figure 5.1-5.3. A small custom-molded orthosis blocks MP joint extension of the little finger to drive the extension force to the stiffer PIP joint.

I have created a term called active redirection, describing the simple concept of blocking normal joints so stiff joints receive the muscle power needed to move them. Clinical observation proves that PIP joint contractures of the ring and little fingers resulting from ulnar palsy claw deformity regain full PIP joint extension when the MP joint is blocked from full extension. The difference between blocking exercises and active redirection is duration.

Active redirection is accomplished during waking hours when movement is volitional and replaces any and all passive range of motion. This can be applied as a blocking orthosis worn during waking hours (Figure 5.1-5.3) or, if the stiffness is severe, as a non-removable cast worn full time until rebalance of motion is achieved in the stiff joint(s)13,14 (Figure 6). Passive range of motion is not necessary to mobilize stiff joints if cyclical active motion is repeated frequently and the patient cannot revert to the previous imbalanced pattern of motion. Active redirection when MP joint hypertension is blocked and the stiff PIP joint moves actively into full extension throughout the day simultaneously accomplishes differential glide of tissues planes, reduction of digital edema and motor cortex remapping.

Figure 6. A non-removable cast focuses all active flexion and extension to the finger interphalangal joints until motion in these joints is regained.

In the future, I envision new tools to assist us in mobilizing stiff joints. Scientists have recently developed wearable, stretchable, multifunctional silver nanowire sensors that can be applied directly over joints to provide feedback about the pattern of active motion.15 Perhaps our focus will move toward prevention. Recent studies demonstrate that observation of hand action shows more cortical activity than viewing a landscape or imagining one’s hand moving.16 Vibration applied to immobilized hands shows preserved sensorimotor networks in comparison to immobilized hands without vibration.17 Regardless of the new tools we may use, I hope we will shift our focus from passive range of motion to redirected active motion, providing the ideal dosage of both mechanical and cortical stress.

NOTE: This article is being published simultaneously in the ASHT Times and the IFSSH E-zine by permission of the author.

← Previous
Categories
Recent Posts
It is Not Rocket Science: Choosing the Right Running Shoe
Using Your Orthopedic Skills to Treat a Stroke Patient

Orders cannot be changed or cancelled after submission. Please review your order for accuracy before submitting.

When choosing your shipping option, please allow 1-2 business days for order processing in addition to shipping times. We make every effort to process orders the same day up to 1:00pm, but we cannot guarantee it. BraceLab does not ship on weekends or holidays.

BraceLab wants you to be satisfied with your purchase from us. All Push Braces and Push Sports Braces are guaranteed against any defect in materials or workmanship for 90 days from the date of purchase, unless altered or laundered incorrectly (see product insert for instructions).

BraceLab offers free returns and exchanges to ensure that you get the correct size and fit.

BraceLab Customer Service is available weekdays from 9:00AM to 5:00PM EST, except on holidays.

Exchange braces and refunds on returns will be issued within two business days of BraceLab receiving the original product under the conditions stated above. Replacement shipping is provided free via USPS Priority Mail. If you require expedited shipment it must be paid in full and in advance of shipment.

These policies do not apply to international orders. Please contact BraceLab for information.

Please ensure you follow the above policies for prompt resolution. If these policies are not met, BraceLab may refuse your shipment – you will be notified and the product may be returned to you at your expense.

Exchanges can be made provided the original order was placed for a specific patient and the exchange or return request is made within 30 days of the original purchase. Exchanges and returns are not allowed on original orders of 4 or more braces.

You must contact BraceLab Support at 1-888-235-8221 or support@bracelab.com to obtain an RMA authorization number prior to sending any return or exchanged or defective product.