The store will not work correctly in the case when cookies are disabled.
Free Shipping Now Included*Exclusions Apply
US Distributor of Push® Braces
Skip to Content

What I Learned Treating my Own Ankle Sprain

What I Learned Treating my Own Ankle Sprain

Stepping in a sprinkler hole this summer while jogging gave me an unexpected opportunity to experience my own response to a variety of current treatment approaches for lateral ankle sprain to determine their efficacy. See Figure 1. 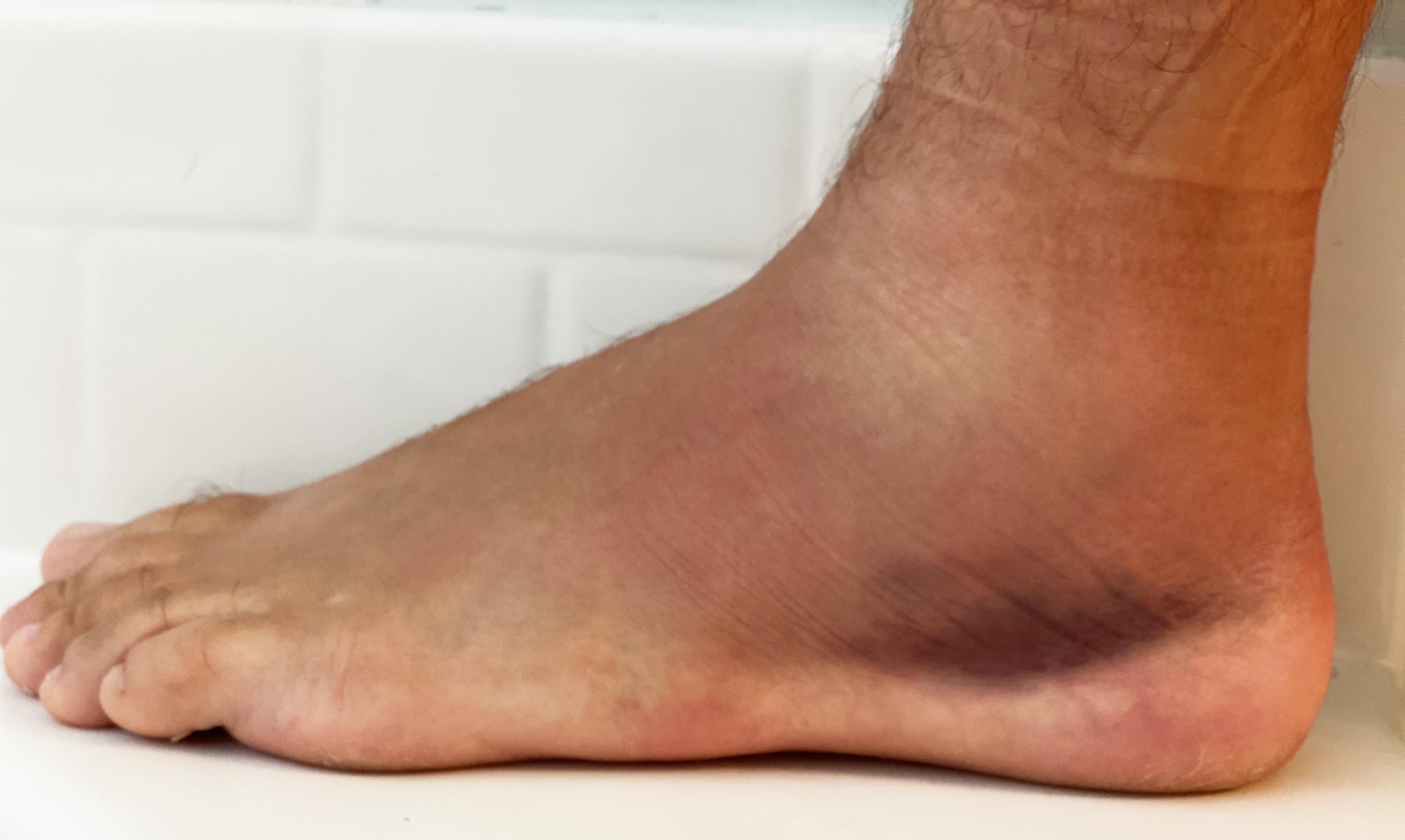 As clinicians, we tend to fall into routine treatment patterns and may be reluctant to vary our treatment approaches. I wanted to determine what I might change in my treatment of ankle sprains to enhance my clinical practice. 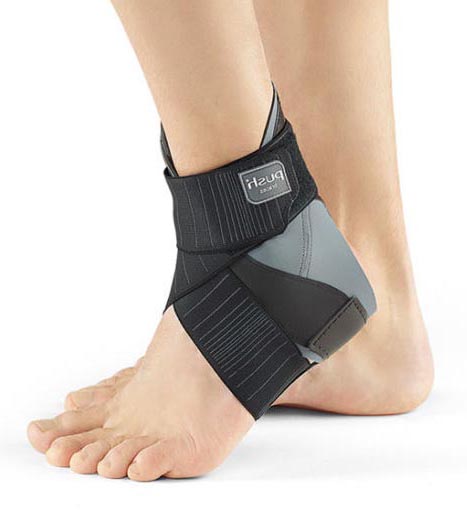 The day after my injury, I was unable to walk with a normal gait pattern without support. I chose to wear the Push ortho Ankle Brace Aequi (Figure 2) as it limits inversion while allowing functional ankle motion. (2) I wore the brace full time for 12 weeks and thereafter only during activity. My goal was to eliminate mid to end range ankle inversion.

Knowing there is a high likelihood of developing chronic ankle instability after a sprain (1), I recalled the treatment approach of a podiatrist with whom I worked. He believed that allowing any excessive stress to the lateral ankle ligaments (ankle inversion) before 12 weeks disrupts the healing process which in turn reduces the ligament tensile strength, and thus decreases the ability to support the ankle joint. His patients wore an ankle brace for 12 weeks while performing only pain-free activities not requiring ankle inversion. Examples of those activities are walking or running on a treadmill, Olympic weightlifting, biking, and elliptical. See Figure 3. 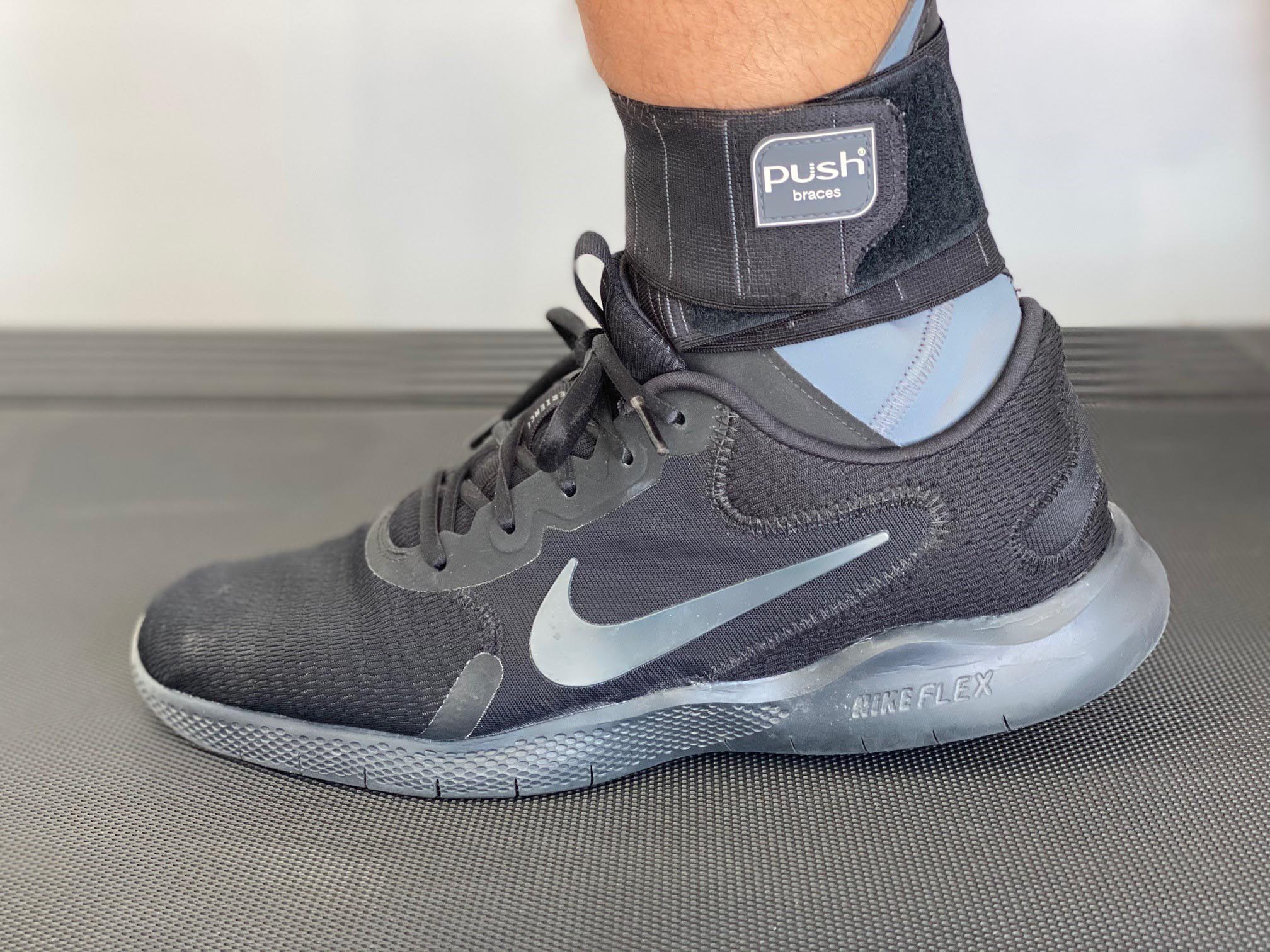 Initially I was struck by how vulnerable my ankle was when showering without the brace support, and I learned how uncomfortable it is to begin to regain inversion after 12 weeks of limiting that motion. I will now encourage patients to expect some discomfort as they start to recover inversion.

I initiated Olympic weightlifting 48 hours after my injury to prevent my loss of strength and the associated negative neural adaptation of the muscles supporting my ankle, knee, and hip, which has been seen in athletes (3). I performed the Olympic squat and deadlift at 75% of my one-rep max for 4 sets of 8 reps, always wearing the Push ortho Ankle Aequi Brace. See Figure 4 and 5. I monitored my ankle for swelling pre-exercise, post-exercise, and 24 hours post-workout and noted no changes, so I repeated the Olympic training again 48 hours later. Had I observed edema, I would have rested 96 hours before repeating the exercise.

Before completing the resistance training, I felt apprehensive when walking, and I don’t know why. I found this exercise beneficial in reducing my apprehension and improving my balance while performing a single-leg stance, which I tested before and after the training session.

Since this weightlifting approach requires protection of the injured ankle while loading, I will reserve this for patients who are able to monitor their own response to exercise accurately.

Wearing the ankle brace for one year while exercising

Previously, I assumed continuing to wear an ankle brace weakened the ankle, potentially limiting long-term function. Evidence continues to show, however, that in addition to improving functional ability during the early stages of recovery, long term use of an ankle orthosis prevents recurrent injuries and does not reduce muscle strength nor impair function (4).

Now six-months post-injury, I struggle to wear the ankle brace daily because I do not feel I need it. If I were not aware of the research that supports continued use of a brace to prevent a future re-injury, I would not continue to wear it (1). Based upon my experience, I realize how important it is to convince patients to wear an ankle brace long term to prevent re-injury.

I discontinued my home exercise balance activities after four months. About two weeks later, I noticed unequal stance time while running on the treadmill. I resumed my balance exercises and noticed an improvement shortly thereafter. Most individuals do not continue to work on balance as part of their routine training after they have completed rehabilitation. Now understanding the importance of continued balance training, I will stress this with all my patients. I now see my patients at four-, six-, and twelve-month intervals for follow up to reinforce the need to continue balance exercises and use of the brace.

Download Clinical Clues No.19, What I Learned Treating my Own Ankle Sprain; January 2021

Disclaimer: BraceLab Clinical Clues are intended to be an informal sharing of practical clinical ideas; not formal evidence-based conclusions of fact.

Orders cannot be changed or cancelled after submission. Please review your order for accuracy before submitting.

When choosing your shipping option, please allow 1-2 business days for order processing in addition to shipping times. We make every effort to process orders the same day up to 1:00pm, but we cannot guarantee it. BraceLab does not ship on weekends or holidays.

BraceLab wants you to be satisfied with your purchase from us. All Push Braces and Push Sports Braces are guaranteed against any defect in materials or workmanship for 90 days from the date of purchase, unless altered or laundered incorrectly (see product insert for instructions).

BraceLab offers free returns and exchanges to ensure that you get the correct size and fit.

BraceLab Customer Service is available weekdays from 9:00AM to 5:00PM EST, except on holidays.

Exchange braces and refunds on returns will be issued within two business days of BraceLab receiving the original product under the conditions stated above. Replacement shipping is provided free via USPS Priority Mail. If you require expedited shipment it must be paid in full and in advance of shipment.

These policies do not apply to international orders. Please contact BraceLab for information.

Please ensure you follow the above policies for prompt resolution. If these policies are not met, BraceLab may refuse your shipment – you will be notified and the product may be returned to you at your expense.

Exchanges can be made provided the original order was placed for a specific patient and the exchange or return request is made within 30 days of the original purchase. Exchanges and returns are not allowed on original orders of 4 or more braces.

You must contact BraceLab Support at 1-888-235-8221 or support@bracelab.com to obtain an RMA authorization number prior to sending any return or exchanged or defective product.